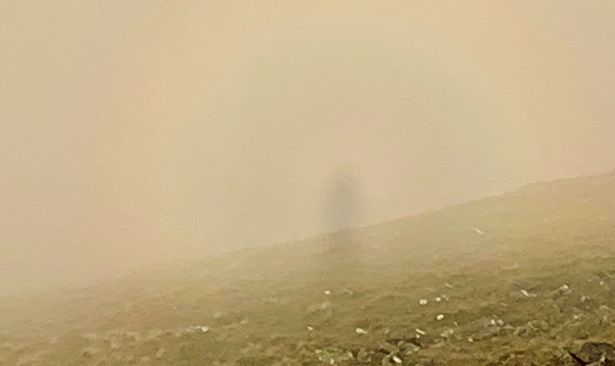 Chris Randall was hiking in Lake District, Cumbria, when he took out his camera and snapped pictures of a rare phenomenon within the misty mountains, which appears to show a ghostly figure walking close by.

While it was initially thought that Randall had captured a ghost, he instead learned that he captured what is called a ‘broken spectre’, which is a rare phenomenon which can appear on a misty day when the sun is behind a person, according to the Mirror.

Randall was camping alone and hiking along Red Pike near Wasdale Head, Lake District, Cumbria at the time of the occurrence.

“I do a lot of hill walking, it is quite common in the mountains”, Chris from Buxton, Derbyshire said of the occurrence. “For years I have been trying to catch one, the weather conditions have to be right for one to appear.”

“The Brocken specter gives the appearance you have a shadowy presence walking alongside you, that comes and goes with the mist and the light.”

“It’s very surreal and was a little unnerving.

“I camped the night before so I knew there was cloud up and about the area and I was hopeful I would see one that day.

“As soon as I caught it in the corner of my eye, I knew exactly what it was.”

According to the Met Office: “When an observer stands on a hill which is partially enveloped in mist and in such a position that their shadow is thrown on to the mist, they may get the illusion that the shadow is a person seen dimly through the mist.

“The illusion is that this person or ‘spectre’ is gigantic and at a considerable distance away from them.

“The sun shining behind the observer projects their shadow through the mist, while the magnification of the shadow is an optical illusion which makes the shadow on nearby clouds seem at the same distance at faraway landmarks seen through the cloud.”